watch 02:45
The Loop (Games)
Do you like this video?
Play Sound
"Beware, Sir Knight!"
Benedictine Monks have warned that this manuscript contains spoilers.
Heed our warning!

Unexpected Visit is the first main quest in Kingdom Come: Deliverance, and functions as the tutorial. Henry is awakened by his mother after staying out late the night before, and is reminded that there are chores to be done.

We finally got some fine spring weather, but still I slept in late in the morning, because I was out celebrating til late in the evening. It was a bit hard getting out of bed this morning.

In 1403, Henry is awoken by his mother in his home town of Skalitz, reminding him that his father, Martin, the local blacksmith, has to finish Sir Radzig's new sword that day. She questions Henry regarding a scratch on his hand, and despite Henry's various attempts to lie, she figures out (as mothers do) that he has been up to mischief - learning the art of sword-fighing from Vanyek. She scolds her son, and advises him to focus on learning his trade, stop hanging around with his no-good friends Matthew and Fritz, and maybe even settle down with his sweetheart, Bianca.

This first piece of dialogue begins to shape Henry's character, with the option to choose from four specific answers to the first two questions. These answers will give Henry a small boost in the respective stat - but no need to worry, every single trait will be available for you level-up as the game progresses.

Below are the four traits you may first choose to boost early in the game.

Henry is prompted by his mother to have breakfast, as not addressing your hunger can have adverse effects on your abilities. There is pottage cooking in a pot on the fire, or there is fresh food lying around the house. Eating enough, but not too much, is the key, as being hungry or overeating can negatively impact your stats. Luckily, the people of the region are happy for you to eat from their cooking pots - there's one in almost every house. If you're adventuring though, be aware that cooked meat like the roast duck will spoil quickly, while common foods like bread, bacon and cheese last a few days, and drinks don't go off at all (except milk) ... but they might get you drunk. Eating off-food will lead to food poisoning and possibly death. It's not advisable to eat raw meat without the required perk, as you'll get sick, but you can buy preserved food like dried meat, mushrooms and fruit that will last indefinitely (and with From the Ashes, you can dry and smoke your own food.)

Once you have eaten, head outside to meet your father at his forge. He will give you a list of errands to run, before he can complete the sword for Sir Radzig - and maybe find time to visit that swordsman Henry was lying about. First, head down the path and go left to the castle gates. The local guards, Janek and Jaroslav, won’t let you pass into the castle - but they do have the crossguard that you need, which is enough for now.

Head back down the path and through the gate to enter the village. Follow the path down past Havel's cart, to see Combat Master Vanyek sitting on a table outside the inn. It’s his last day in town, so make the best of it by getting a primer in how combat works - your life may very well depend on it. Follow Vanyek to the arena near the sheepfold to get started.

Lock on to Vanyek and start strafing. Notice the five-pointed star, a stick figure with four limbs and a head, and the dotted chest in the middle. As you move your cursor around you can target each of these points. Keep this in mind as you change up your stance, and bear in mind where your opponent may have weaker armor. For example, Vanyek has some nice looking metal greaves - but his arms are lightly armored and his head is exposed.

Try out some simple slashes and practice changing angles of attack. After this, you can try your hand at stabbing - good for catching opponents off guard, but with less force. Finally, you get to try your hand at chaining attacks. Slash, and as soon as you hear the crack of your sword, follow up with another at a different angle, or a thrust to chain the attack. Eventually, you’ll be able to learn devastating combos that incorporate chaining attacks.

Then, head back to the town market and follow the left path alongside the houses. There you’ll find Kunesh - using the axe he’s neglected to pay for. Unfortunately, he’s not a very nice guy, and will refuse to fulfill his debt.

In this game, persuasion can go many different ways. Your charisma and speech will do a lot for getting the job done, as will your clothes and weapons in certain circumstances - provided your stats are better than your opponent. Additionally, a bit of money can win over someone’s mind - and if all else fails - so can your fists. Some people take a dim view to people trying to pull one over on them, so failing a skill check might not end well for you. Don’t worry, if Kunesh beats you up a bit, you can run home to mommy to get patched up and you will be given a chance to find an alternative way receive a payment - just remember to use the nearby trough to wash the blood off. Nobody wants to talk to a bleeding or dirty peasant - even if you're wearing your finest armour or courtier clothes, dirt and blood will distract from your charm.

Here, you will learn that there are multiple ways to solve your problems. In regard to Kunesh, you can wait until he puts down the axe, and steal it, but you'll need a lockpick or Kunesh's keys to unlock the chest where he's stashed the hammer and nails. Friz can give you three lockpicks if you visit him outside the tavern (note: you can get lockpicks from Fritz only if you didn't successfully beat Kunesh before, or if you didn't persuade him to pay the debt. Fritz gives the only possible lockpicks in this area and they are very useful for many locks, so I suggest you don't win over Kunesh quickly).

Alternatively, you can turn tail and run. Kunesh will give up, and you will have to find another way to get the payment. Once you've help your friends get revenge (see below), you can ask them to help you out in return. They enjoy a good fight so this does not take much persuasion, and once you've beaten up the old drunk, he'll give you the keys.

Whatever method you decide to attempt with Kunesh, entering the tavern will start another objective. One of the patrons, the German-born Deutsch, is running his mouth about the recent abduction of King Wenceslas IV, who has been usurped by his brother King Sigismund. The Deutsch is in favour of the move, as he considers Wenceslas to be weak, and unfit to rule.

Henry and his friends aren’t too pleased about a foreigner criticizing their rightful King, and you’ll have the option to partake in a little revenge - just remember if you accept but take too long, they’ll have their fun without you. This will be an important thing to keep in mind: the world wont stop and wait for Henry, and many quests will continue without you. And if you don’t help them, they may not be willing help you team up against Kunesh.

Be sure to talk to Fritz on the way if you want those lockpicks, then discuss a plan of attack when you get to the house, if you want to join in. Luring the Deutsch's wife away is easy - just tell her that her fool of a husband is running his mouth about kings and popes. Once she’s gone, grab some dung and go to town!

The Deutsch’s son Hans will appear with Zbyshek and another lackey, prompting a fist fight. Unlike Kunesh, combat here is very easy, and damage isn't permanent. Just lock onto one of the enemies and keep punching or blocking until either they run or the local catchpole (a guard) comes running. If Johanka comes to warn you he's on the way, it's best to flee with your friends, otherwise the catchpole will let you have it (OK he lets you off the hook, but in the future, guards are to be avoided when breaking the law).

Meet your friends behind Kunesh's house and make sure he's settled his debt. then go to the market near the pillory and seek out the charcoal-burner’s helper to get the needed charcoal. You’ll have enough money to cover the 10 pieces, but if you want, you can engage the merchant in haggling and lower the amount by a bit. Usually, the merchant will counter with an offer a bit higher than yours, but as long as it's below the original amount and you don’t use up his patience, you can get away with a good deal. You should talk to everyone you meet - not only does it help you learn about the goings on and important characters, but every conversation gives you speech experience. If you make the effort with your neighbours, you can rack up the speech points quite quickly.

Finally, it’s time to meet Henry’s sweetheart Bianca at the tavern - after all, if you visit her any earlier, the beer will be warm, and Father will send you back for another. Head inside and speak with her to get apitcher of ale for your father. Better still, she’ll give you three Saviour Schnapps. This alcoholic drink is one way you can manually save the game, but getting more schnapps costs money, so choose these points wisely. Sleeping in a bed you own also saves, and the game will periodically auto-save at the start of main quests.

Once your chores are done, it’s time to head back to Father. As you forge the sword, he may have some choice words for you depending on if you and your friends got into some trouble. Afterwards, a local lass named Theresa, one of your old childhood friends, will come by for some nails, and your father will send you to the house to get them (you might as well grab everything in the trunk).

As you complete the quest and turn over the goods, Lord Radzig himself, along with the visiting Sir Istvan, will come to admire the magnificent blade you have forged. Sir Istvan compliments Martin on his work, asking how such an accomplished swordsman came to be making horseshoes in Skalitz. Lord Radzig informs him that it's a "long and peculiar story" ... one that even Henry doesn't know.

After they leave, Henry questions his father about his past, but Martin only replies he might tell him about it... another day. The two argue over Henry's desire to go off and have adventures, with Martin extolling the virtues of a quiet life - one which is about to be shattered, as a messenger gallops into the inner gate and a horn in the distance sounds the arrival of King Sigismund and his army of Cuman mercenaries, led into battle by Markvart von Auliz. The Attack on Skalitz has begun. 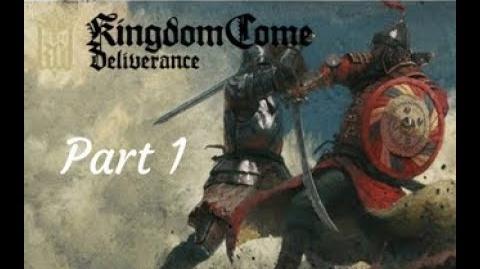 Retrieved from "https://kingdom-come-deliverance.fandom.com/wiki/Unexpected_Visit?oldid=36398"
Community content is available under CC-BY-SA unless otherwise noted.